We intend to develop this page soon into a community site for Brooksby Street, including history and news.  If you'd like to be kept informed as the page changes and hopefully grows, please mail us at: info [at] larpnet [dot] com, (removing the spaces). 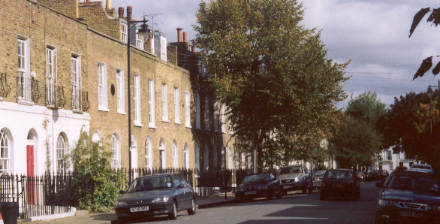 Brooksby Street: its history and some background

Barnsbury - when Brooksby Street was a field

The area of Barnsbury was predominantly rural until the late 18th century, forming the land of the Manor of Bernersbury, the land of the Berners family who had been powerful medieval manorial lords, owning a large part of Islington.  By the end of the 18th century Barnsbury, like other parts of Islington, were being regarded as attractive part-rural suburbs by the comparatively wealthy wanting to move out of the cramped City of London and industrial Clerkenwell.  The area is close to the City, and had strong local trade in its position as the first staging post for travellers making the journey from London to the north, and with considerable agricultural traffic and cattle driving to the nearby Smithfield cattle market in the City.

Barnsbury Square, Brooksby Street and the surrounding roads are built to the west of the Back Road, now Liverpool Road.  The area previously consisted of three fields – Gravelpit Field, Workhouse Field (the original workhouse chapel, with its minature turret, is still on the corner of Liverpool Road and Barnsbury Road) and Reed Moat Field.  Reed Moat Field contained a small raised area of ground surrounded by a moat, likely to have been remenants of a Danish or Saxon settlement, though many romantics preferred to believe the story that the site had been a Roman fort.  The site is now in the gardens of Mountfort House, in the corner of Barnsbury Square.

At the start of the nineteenth century the three combined fields were owned by Nathaniel Bishop of Paddington, who in 1810 leased them for 99 years to Robert Clarke the younger of Oundle, Northamptonshire. Clarke is not thought to have built property himself, but sub-let to developers.  Thomas Harding Bilham built parts of the north side of Brooksby Street in the early 1820s, together with the adjoining south side of Bewdley Street (then Upper Park Street).  An inscription on other houses in the centre of the north side of Brooksby Street notes that they were constructed by “Jeffery Morgan of this parish” in 1824.  By the end of the 1830s much of the present Georgian terraces on the north and south sides had been completed.  These were unassuming houses, mainly two-story plus lower ground floor, built for workers, artisans and tradespeople meeting demand from the new residents of grander houses elsewhere in Barnsbury.  Like most Georgian houses, they were constructed with an expected life span of around 30-40 years without heavy maintenance. 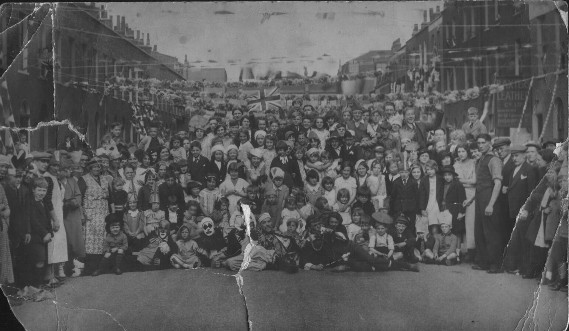 Brooksby Street in 1935: the Silver Jubilee street party.  With thanks to Keith Jacobs (see below), whose uncle is the tall man on the right at the front. Do you recognise anyone else in this picture? If so please e-mail us at info [at] larpnet [dot] com.

With the expansion of London’s population and industry, as the more affluent moved to the new outer suburbs of London in the late 19th and early 20th century, Islington took on a more industrial urban character.  Brooksby Street was until recently part of a light industrial district, and itself had a number of workshops and warehouses.  In Brooksby Mews, the short road between Brooksby Street and Bewdley Street to the north, there were a number of workshops including a taxi electrical repair shop which shut down only in the mid-1990s after a fire, and is still remembered by many cabbies.  There were workshops on the street itself, between the Rising Sun pub and the corner of Thornhill Road, which having been abandoned many years earlier were demolished to make way for new flats in the 1990s. 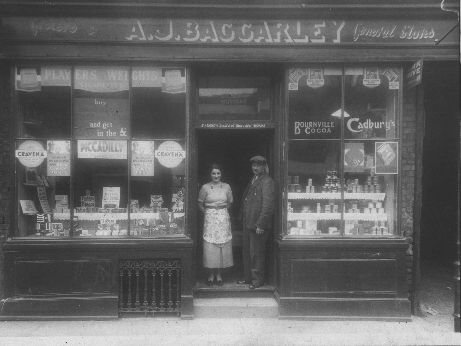 At the Liverpool Road end was a large newspaper distribution warehouse, Brooksby News, with lorries and vans noisily loading and unloading throughout the day and night.  Brooksby News vans still do door to door newspaper deliveries to houses in the street.

Also at the Liverpool Road end was Baggarley's Grocers and General Stores, run by Albert Baggarley, a one-time bus driver (in the days when buses were horse-drawn), who also ran his own cab while runnning the store with his daughters.  The shop was destroyed when the house next door in Liverpool Road took a direct hit in an aerial bombardment during World War II.  Children in the 1940s and 1950s remember playing on "the bomb site".  After the war the Baggarley family became landlords of the William IV pub at 84 Thornhill Road.


Picture: Albert and Alma Baggarley at the door of their Brooksby Street general store, taken around 1940.
With thanks to Keith Jacobs, researching the Baggarley Family; www.baggarley.pwp.blueyonder.co.uk

When Brooksby News relocated to Highgate in the mid-1980s (Cara House is now on the site) the council took the opportunity to reduce traffic using the dangerous turn from Brooksby Street into Liverpool Road by closing the street at the Thornhill Road end.  Proposals in 2002 to reopen the street, as part of a wider traffic calming scheme which saw others closed, were thwarted following opposition from residents of the Street and Barnsbury Square, supported by local MP Chris Smith. The street had diagonal parking and resembled a long car park, until 1998 when it reverted to kerbside parking and new ornamental streetlights were fitted.

Chris Smith, local MP, writing in the Highbury and Islington Express, 15 March 2002:
"...take the case of the Barnsbury traffic proposals. At present, Brooksby Street – which runs off Liverpool Road – is closed at its other end to all but emergency vehicles. It’s an arrangement that has stood the test of time, over the last 25 years, and still works well. Now the Lib Dems have come along with their idea about shutting off a whole swathe of other roads in the Barnsbury area, something that has raised huge local controversy.  One eagle-eyed resident of Brooksby Street spotted, in reading the detail of the council’s proposals, that an inevitable consequence of what was being mooted was the re-opening of the closed end of their street. Nowhere was this spelled out in the council’s leaflets. Nowhere was there any mention of it, in fact. It was almost as if the council didn’t want the residents to know about it. Fortunately, they now do, and are making their views very clear."

The Rising Sun pub closed in the early 1990s for conversion to apartments.  It was for many years a popular local pub, with wartime memorabilia hanging from the ceiling, a friendly eccentric landlady, and a large beer garden.  It was the local for workers from the newspaper warehouse and workshops in the area, and small crowds of drinkers would gather on the street outside in the long summer evenings sometimes listening to and applauding the recitals of a concert pianist who lived across the street.

Conductor Simon Rattle, now with the Berlin Philharmonic, lived in Brooksby Street for many years before moving in the 1990s.  Economist Clare Spottiswood, instrumental in reforms to the UK energy market was another resident.  An Evening Standard theatre critic currently lives in the street, as does a Euro-sceptic former Labour MEP, recently known for a legal challenge forcing Islington Council briefly to take down the European flag from the town hall - until everyone concluded that his challenge was in fact pretty silly.

The Baggarley Family homepage www.baggarley.pwp.blueyonder.co.uk ; contact Keith Jacobs, who is researching the Baggarley Family;  member of East Surrey and North London & Middlesex Family History Societies and the Society of One Name Studies

Passeggiate a Islington Luca Stanca has written this impressive series of walk guides, including historical notes (in Italian):  link here for his index page.


Contact us by e-mail at webperson [at] larpnet [dot] com - without all those spaces.
You can also leave comments and subscribe for updates at larpnet.com/updates.